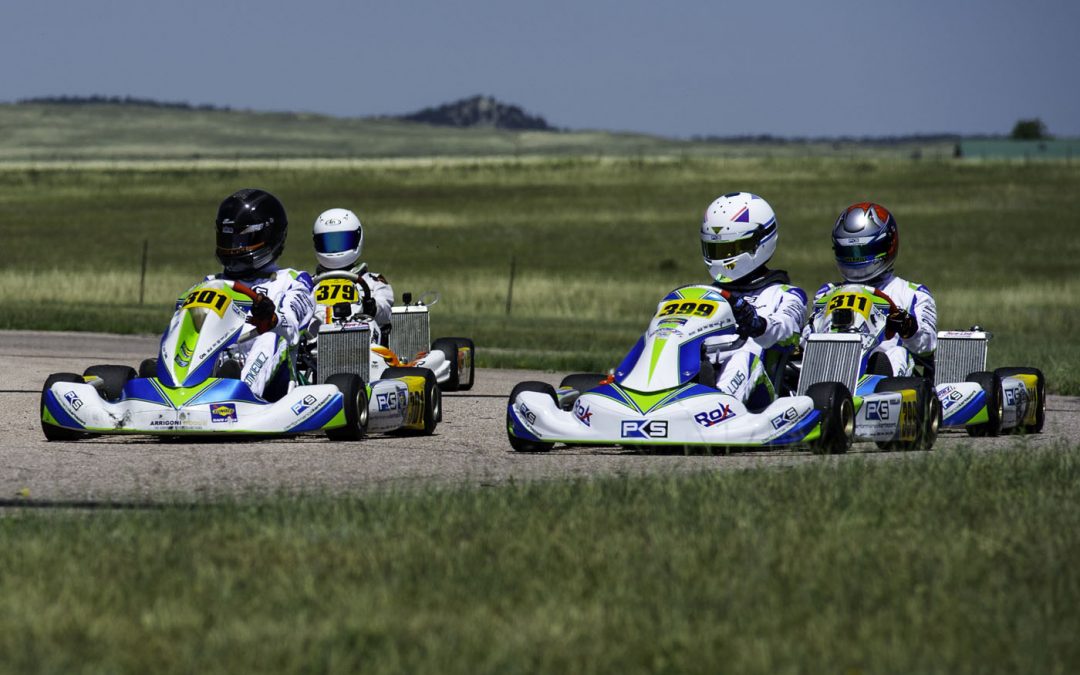 Sunday August 18th, 2019 was race #5 of Rok The Rockies kart racing series at SBR Motorsports Park. We had beautiful weather once again for the second to last round of the championship season with 5 classes competing on the challenging and physically demanding full track configuration at SBR, running counter-clockwise direction.

The Senior Rok class was lead most of the day by a quick and consistent Daniel Fellows, with a very tight pack behind him. In the main event, current points leader Phillip Niemkiewicz was able to throw in a solid pass on Fellows entering the hairpin then pulled away from the field to take the win in the final.

Master Rok was dominated by Brooks Myers who swept the sessions and races through the day. Although Myers drove away from the field, there was exciting action to watch in the battle for the remaining spots on the podium and new to the series racer Jeremiah Meek found himself standing on the 2nd step of the podium after the final.

The 100cc Senior Rok / 100cc Master Rok group once again provided the spectators with exciting races and position swapping action. The tightest racing took place in battles for the lead between Sullivan Sherill and Brody Schucard, at nearly any point in the races there was a few feet at most between the two karts. In the final, Schucard and Sherill made contact with each other in one of the fastest sections of the track causing Sherill to spin. Schucard showed great sportsmanship in attempting to wait for Sherill so that the two could continue to wow the crowd, however with 3rd place driver Jett Rotunda closely behind and Sherill’s momentum stuck in the mud, Schucard sped off to take the lead. The final win would be awarded to Sherill due to a small penalty applied to Schucard’s finishing position because of the on-track incident and it was great to see such stand-up and positive attitudes by these championship minded and dedicated racers.

The 100cc Master Rok race was a fun battle to watch as well. Current points leader Leo Kosman lost his chain and would not finish the final. Sana Bhatti would take his first win of the series in the final, and Georg Bower finishing 2nd. Congratulations Sana!

Mini Rok was lead through the morning by a new driver to the series, Cadence Presley. Presley threw a chain in the pre-final and would start in the back for the final. Presley kept his head on straight and patiently made a few passes in the final over the opening laps and ended up taking the win, with Alexander Gevorkyan in 2nd and Zander DePriest in 3rd.

Congratulations to all of the drivers and teams that competed in the 5th round of the 2019 racing season with Rok The Rockies! A special thanks to our series sponsors; Bridgestone, Napa Auto Parts, and Premier RV. We will see everyone at Round #6 of the ROK The Rockies race series on September 22nd, 2019 only at SBR Motorsports Park!