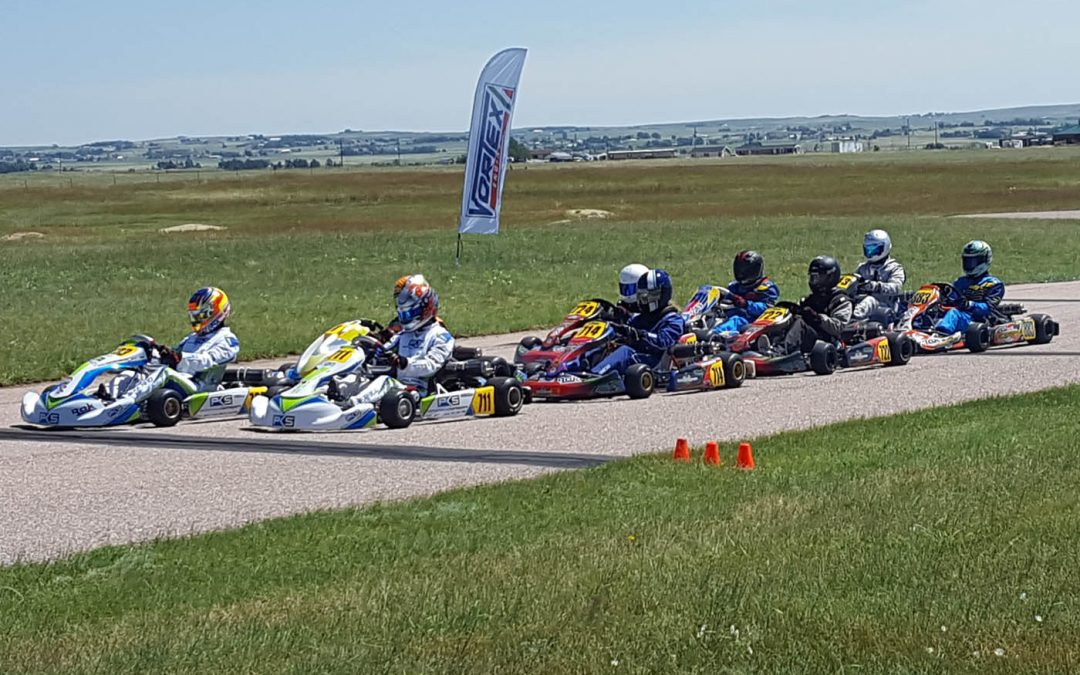 It was a warm and sunny day for ROK The Rockies Round #4 at SBR Motorsports Park on July 21st, 2019. For the first time all season we were very excited to see an on track group consist of 5 rows with 9 drivers making up the 100cc group (Master and Senior classes combined). Practice and qualifying went smoothly for all classes and the most entertaining action to be seen took place in the races throughout the late morning and afternoon.

In the Senior ROK heat race we witnessed a well executed slide job pass by Sullivan Sherill in the #311 into the tightest corner on the track, the left-hand hairpin turn #7. Sherill’s late braking maneuver landed him in P2 to finish the heat race. In the 100cc group heat race a battle took place between the #724 of Daniel Stein and the #883 of Leo Kosman with Stein coming out ahead of Kosman, making his pass with only 2 laps to go. In the 100cc pre-final race we witnessed some excellent race craft between Sullivan Sherill and Brody Shucard. The two senior 100cc drivers ran two wide through multiple corners and kept the racing clean. In the 100cc pre-final Daniel Stein and Leo Kosman would again be running nose to tail for the duration of the race and Stein came out ahead to finish in 5th place.

The Senior ROK final was an exciting race to see. The start was a shuffle of driver positions with Sullivan Sherill  getting loose in turn 1, he slid his kart wide on the exit of the corner and lost a position to Joe Innes in the #379. Sullivan Sherill repeated his strong passing technique into the hairpin again in this race to regain the 2nd place spot. Sullivan slowly reeled in Daniel Fellows and made the pass for the lead with only a few laps to go and took the win!

The Mini ROK event was shaping up to be a good battle between Alexander Gevorkyan and Zach Olsen as the two drivers were running close in lap times. Alexander made a boggle and slid wide through the hairpin turn #7 and lost too much ground to Olsen to try to make any moves. Olsen took the win in the final and swept the day’s events.

The 100cc final was again an exciting race to watch with a good sized field of drivers. Sullivan Sherill had a great start and made a pass in turn #1 on the start to take the lead. THroughout the first half of the race the #911 of Alan Cortes  was challenging the #733 of Brody Shucard for P2. Suddenly and unexpectedly going going into turn #4 Brody Shucard lost a left rear wheel which sent Brody spinning off track and into the grass. Stein and Kosman would again be running nose to tail in the final throughout the second half of the race. Sullivan Sherill came out victorious in the 100cc final!

The Master ROK races were run single file throughout day with Matt Newton sweeping the events and Brooks Myers finishing in a close 2nd place throughout the day.

Congratulations to all of the drivers and teams that competed in the 4th round of the 2019 racing season with ROK The Rockies! A special thanks to our series sponsors; Bridgestone, Napa Auto Parts, and Premier RV. We will see everyone at Round #5 of the ROK The Rockies race series on August 18th, 2019 only at SBR Motorsports Park!